Through an open, competitive solicitation process, we provide grants to universities, corporations, and other institutions to explore new instrument designs and information systems. If you’re an investigator in need of funding, stay connected for updates on upcoming solicitations. If you’re an Earth science researcher in need of an enabling technology, explore our portfolio or contact us here. 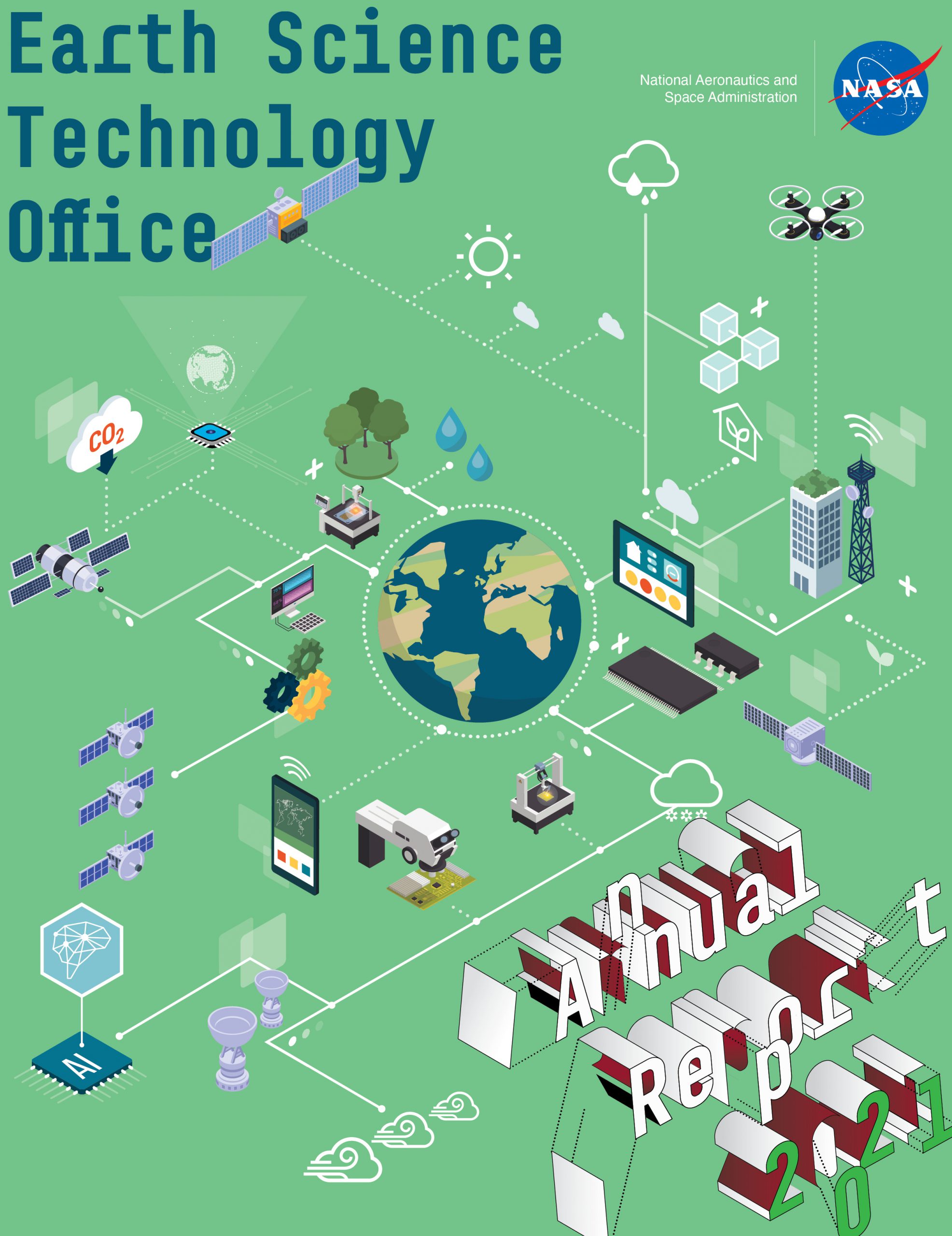 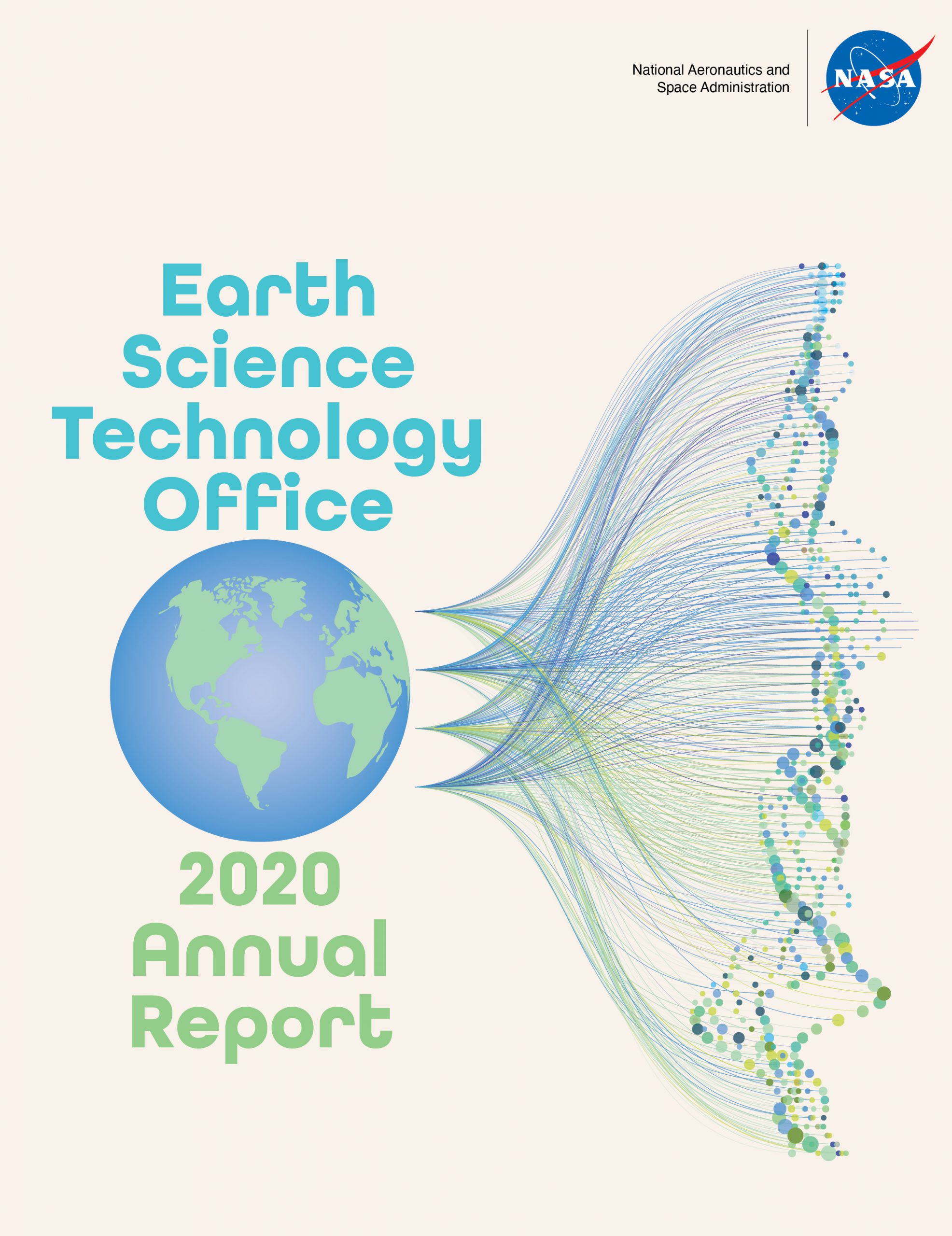 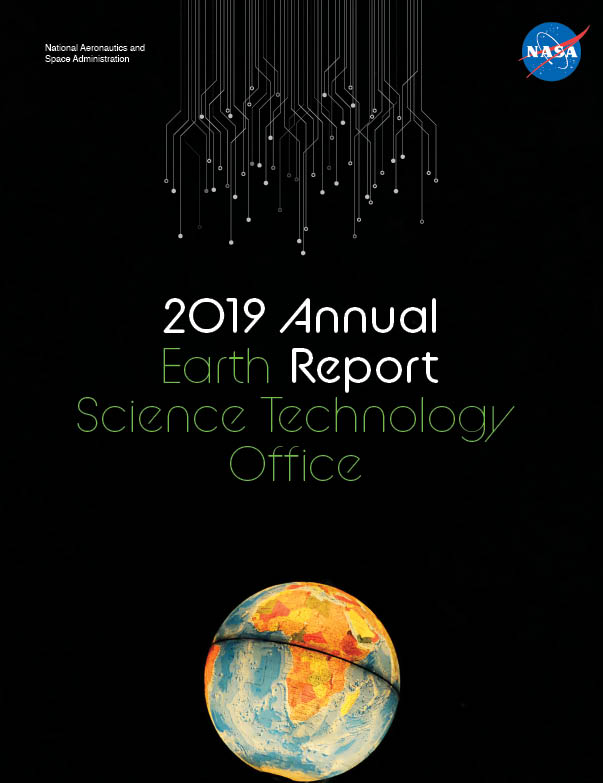 Every year since 2000, ESTO has hosted the Earth Science Technology Forum (ESTF), a gathering of principal investigators, scientists, engineers, and innovators to showcase the current advances for Earth science technologies. Instead of the usual multi-day meeting, the 2021 Earth Science Technology Forum (ESTF2021) was held virtually over eight sessions from May through early July. The proceedings from these 2.5-hour sessions are available on the ESTF2021 page.

Click the images below to see proceedings and work presented from previous ESTFs.

Meet the people who drive ESTO’s vision, manage its programs, and guide its projects, and download our Org Chart here.

The Earth Science Technology Office is led by Associate Director Pam Millar. Pam guides our team as it promotes innovative technology to help scientists better understand our planet. She took the helm in October 2017 and has been with ESTO since 2013 as the head of the Flight Validation program, which ensures technology can work in real-world scenarios. Before joining ESTO, Pam was the head of Goddard’s Laser Remote Sensing Laboratory. She led a group of scientists and engineers charged with developing laser instruments for both Earth and planetary applications, like the Mercury Laser Altimeter, which orbited and observed Mercury. Pam graduated from Rice University with a Ph.D. and M.S. in Electrical Engineering. She earned her B.S. in Electrical Engineering from Rutgers University.

Robert (Bob) Bauer is the Deputy Associate Director of ESTO. He has been with ESTO since 2002 as a technology development manager serving as ESTO’s HQ liaison. In January 2002, Bob stepped into his current leadership role supporting the ESTO Associate Director. He sees ESTO as a vital program to enable the future success of Earth System Science that provides technologists with opportunities to push the limits on new ways to measure and study the earth. Prior to his current role, Bob was at the Glenn Research Center (GRC) in Cleveland, Ohio where he was the Project Manager on the Advanced Communications Technology Satellite (ACTS) and moonlighted as the GRC ESTO associate. After serving four years in the US Air Force, Bob graduated from Cleveland State University with a B.S. in Electrical Engineering (1985) and an M.B.A. in Marketing (1992).

Sachidananda Babu manages the Sustainable Land Imaging – Technology program and In-Space Validation of Earth Science Technologies Program. He joined ESTO in 2016. He strives to ensure that future Landsats, jointly run by the U.S. Geological Survey and NASA, incorporate the latest technology to monitor changes on Earth. He also ensures that tiny, new technology can be tested on small satellites, like CubeSats, to reduce the overall risk of expanding these new technologies into full fledged Earth observing missions. He has an M.S. in Physics from the University of Mumbai and an M.S. in Electrical and Computer Engineering from George Mason University.

Amber Emory manages the Advanced Component Technologies program, as well as the Airborne Instrument Technology Transition program, which is funded by the NASA Earth Science Research and Analysis Program. She supports the Instrument Incubation Program and InVEST program, and helps run solicitations for new project proposals. Amber has a Ph.D.  in wind science and engineering from Texas Tech University and M.S. in atmospheric science from Texas A&M University.

Eastwood Im is an ESTO Associate based at NASA’s Jet Propulsion Laboratory. He manages projects in the IIP, ACT, InVEST, AITT and SLI-T programs. His expertise is on spaceborne meteorological radar science remote sensing and radar design. He was the first instrument architect of the multifunctional radar for the Cassini Mission to Saturn during the pre-project phase (1987 – 1991), and went on to become the system engineer of that instrument until its launch in 1997. He was the Instrument Manager of the CloudSat Mission between 1999 and 2006 developing the first spaceborne W-band radar which has just completed its 14th year of operation in June 2020. Eastwood has a Ph.D., M.S., and B.S. in Electrical Engineering from the University of Illinois at Urbana-Champaign, and is an IEEE Fellow.

Teresa Kauffman is an Administrative Assistant at ESTO. In this role, she coordinates ESTO’s solicitations and ensures ESTO’s selection process is efficient, fair, and transparent. She also works with ESTO leadership to streamline ESTO’s business practices, maximizing the amount of technology development her teammates can accomplish. She holds a B.S. in Finance from the University of Maryland, College Park.

To ensure ESTO’s investments are relevant and received both within and beyond NASA, Philip Larkin manages ESTO’s Advanced Planning efforts. Philip joined the ESTO team in 2003 and leads ESTO’s communications and outreach activities, internal reporting efforts, and early career solicitations, and he serves as liaison to NASA’s Earth Science Research and Analysis Program. He holds an M.S. certificate in Science Writing from Johns Hopkins University and a B.S. in Chemistry from the University of Maryland College Park.

Jacqueline Le Moigne is Program Manager for ESTO’s Advanced Information Systems Technology Program. Prior to managing AIST, Jacqueline was the Assistant Chief for Technology in the Software Division at NASA Goddard. She was also involved with the Space Technology Mission Directorate (STMD) Space Technology Research Grants Program and with the development of NASA Space Technology Roadmaps. Before joining NASA, she was a Research Scientist with the Computer Vision Laboratory of the University of Maryland. She has also worked in the private sector. Jacqueline received a Ph.D. in Computer Science from the University Pierre and Marie Curie, Paris, France. Her personal research interests include Image Registration, Computer Vision, Artificial Intelligence, Autonomous Systems, and Distributed Spacecraft Missions (DSM), as well as high-performance and onboard computing. She is currently a member of the Group on Earth Observations (GEO) Data Working Group.

As a Senior Researcher at both ESTO and NASA’s Ames Research Center, Robert Morris helps develop intelligent, autonomous systems for future Earth and space exploration missions. Morris began his career as a lecturer at the Florida Institute of Technology after earning advanced degrees in both philosophy and computer science. Discovering a passion for artificial intelligence, he left Florida to work at Ames, where he’s spent more than twenty years working on a wide variety of research projects.

Keith Murray is an ESTO Associate based at NASA’s Langley Research Center. He manages projects in the Instrument Incubation Program, Advanced Component Technologies program and InVEST program. His expertise is in active optical systems where he spent his early career developing novel solid-state lasers for remote sensing applications receiving multiple patents. He has worked on many NASA airborne and space instruments for Earth Science in both technical and managerial roles. Keith has a B.S in Applied Physics from Christopher Newport University and a M.S. in engineering Management from The George Washington University.

Nikunj Oza is an ESTO Associate based at NASA’s Ames Research Center. He manages projects in the Advanced Information System Technology program. His expertise is machine learning, data mining, anomaly detection, ensemble learning and applications of machine learning to aeronautics and Earth science. Nikunj has a Ph.D. and M.S. in Computer Science from the University of California at Berkeley and a B.S. in Mathematics with Computer Science from the Massachusetts Institute of Technology.

Jon Ranson is an ESTO Associate for Information Systems projects at NASA’s Goddard Space Flight Center. Jon also serves as Senior Scientist within Goddard’s Biospheric Sciences Laboratory, where he has developed remote sensing linkages to forest ecosystem models and conducted optical and radar research while leading several domestic and international NASA projects. He also served as the Deputy Project scientist and Project Scientist of the EOS Terra Mission, was the science lead on the DESDynI lidar concept. Jon holds a Ph.D. from Purdue.

Laura Rogers is an ESTO Associate based at NASA’s Langley Research Center. She manages projects in the Advanced Information System Technology program. Her expertise is in systems engineering and complex system design. Prior to joining NASA, Laura served as a UH-60 Blackhawk maintenance test pilot and operational test manager in the U.S. Army. She has a B.S.E. in Mechanical Engineering from the University of Michigan and a M.S. in Coastal Dynamics from the University of North Carolina.

Ben Smith is an ESTO Associate at NASA’s Jet Propulsion Laboratory where he manages projects for the Advanced Information System Technology program. Ben has expertise in autonomous systems, machine learning, and data science, and he holds a Ph.D. in Computer Science from the University of Southern California.