A new instrument is expected to give researchers unprecedented insights into the ice crystals that form the wispy clouds that float high in the sky and play an important, but little-understood role in Earth’s climate.

The instrument, called SWIRP — short for the compact Submm-Wave and LWIR (longwave infrared) Polarimeters for Cirrus Ice Properties — combines for the first time multiple wavelengths to obtain information about the ice crystals making up cirrus clouds. The instrument will help scientists understand their role in regulating Earth’s energy balance, which can evolve with climate change, Dong Wu, a scientist at NASA’s Goddard Space Flight Center in Greenbelt, Maryland leading the SWIRP effort, said.

Wu and his team are building the instrument and planning to demonstrate SWIRP on a high-altitude balloon or aircraft next year. Once proven, the shoebox-sized instrument would be ready to fly on a satellite mission, Wu said.

SWIRP follows another instrument, also led by Wu, called IceCube. During its 15-month sojourn aboard a 3U CubeSat, IceCube produced the world’s first map of the global distribution of atmospheric ice. It obtained this data in only one frequency band — 883-Gigahertz — while SWIRP will study the same phenomenon in multiple frequencies, ranging from the submillimeter or microwaves that fall between radio and longwave infrared on the electromagnetic spectrum.

Understanding ice clouds is important for interpreting Earth’s radiation budget. Clouds determine how much sunlight gets in and how much gets bounced back into space. Clouds that sit at a lower altitude tend to reflect sunlight, while colder, higher-altitude clouds let more sunlight in and create a greenhouse effect. Scientists struggle to understand the impact of cirrus clouds because it’s difficult to calculate how their plentiful and irregularly shaped ice crystals scatter sunlight. 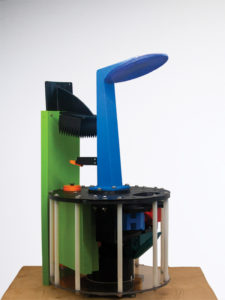 SWIRP could help answer that question. SWIRP would allow scientists to see ice clouds more clearly because it measures ice clouds in three different wavelengths — the 680-Gigahertz, 240-Gigahertz and infrared bands — which are sensitive to differently sized particles.

Although existing sensors can observe small and very large ice particles, SWIRP can see intermediate ice particles, which closes an existing gap in NASA’s observational capabilities. “Ice clouds are currently a knob you can adjust in climate models to make sure everything else fits,” Wu added.

SWIRP will also enhance the international capabilities of cloud-ice observations. The Ice Cloud Imager, or ICI, now being developed by the European Organization for Meteorological Satellites, is a millimeter/submillimeter wave radiometer that will also measure ice clouds to support long-term climate monitoring and validate the characteristics of ice clouds in weather and climate models.

ICI is much larger than SWIRP. Not only could it be built for less money, SWIRP would enable multi-point cloud observations from a constellation of SmallSats,  which would provide complete daily coverage, Wu said.

This article originally appeared in the Summer 2019 edition of Goddard’s Cutting Edge magazine.