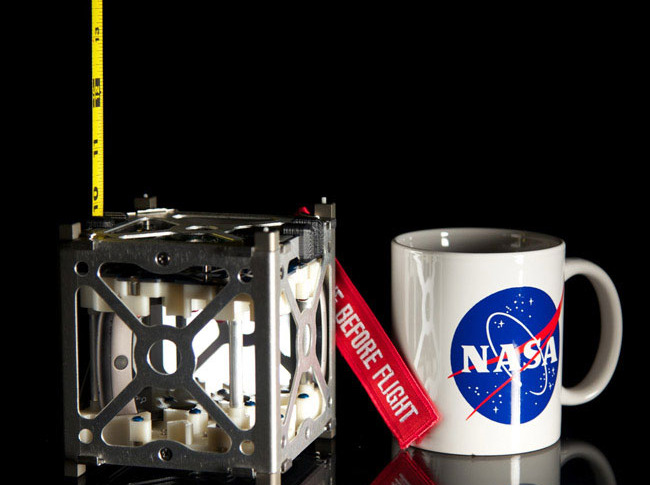 8/13/2021 – The smartphone in your pocket packs more computing power than all of NASA had at its disposal when it first sent humans to the moon. But many spacecraft still rely on outdated computers to process immense amounts of complex data.

“Software for processing data more efficiently can only be as revolutionary as the hardware hosting it. To improve data processing, that computing hardware must also keep pace,” said James Yamaguchi, Vice President of 3D Electronics and Mass Storage at Irvine Sensors Corporation.

With funding from NASA’s Earth Science Technology Office (ESTO), Yamaguchi is working with a team of scientists to create a novel computer technology that would allow space-based remote sensors to process data far faster and more reliably. The technology, Stacked Miniaturized and Radiation Tolerant Intelligent Electronics (SMARTIE), uses advanced packaging to integrate three high-performance computer tiles into a folded-flex module with over 300 Gigaflops of computing power and 15 Theoretical Operations Per Second (TOPS) of artificial intelligence (AI) performance. In addition to increasing the speed at which an instrument could process data, SMARTIE’s stacked computer tiles would also help shield computers from interference caused by radiation in space. Perhaps most importantly, SMARTIE would bring these benefits to instruments while consuming less than 10 watts of power – less energy than the average lightbulb. That means satellites equipped with SMARTIE would be much lighter and more cost-efficient than satellites that require numerous heavy batteries to power their instruments. While still in the very early stages of development, SMARTIE could eventually disrupt satellite applications across the spectrum, from Earth observation instruments to planetary exploration instruments built to study distant planets and stars.

“SMARTIE would have endless applications. It could provide autonomy to single satellites or satellite constellations using AI, enable distributed sensors where parts of the instrument are set in different spacecraft, and perform complex operations usually done on the ground to reduce data throughput.” said Yamaguchi.

Powerful computers that digest data quickly use teams of processors to perform multiple calculations at the same time. With more than 150,000 processors, for example, Fugaku (currently the world’s most powerful supercomputer) can perform as many as one quintillion (1018) calculations each second. But processors require space and energy, two things in short supply onboard satellites tailored for maximum efficiency.

“We’re talking about satellites that are tens of centimeters in size. We may be able to outfit those satellites with computers strong enough to process data in-situ, but that data processing capability often takes up resources that could be used to support a stronger instrument array,” said Javier Bosch-Luis, SMICES Co-Investigator and Technologist at NASA’s Jet Propulsion Laboratory (JPL).

In addition, while Earth’s atmosphere shields computers on its surface from most cosmic radiation, computers in space don’t have that same protection. A particularly powerful burst of radiation could impact a computer’s ability to process data accurately or even destroy it completely.

“If that happens, and the satellite can no longer process or relay data, then you’re flying a very expensive brick. Even computers small enough to fit practically onboard compact satellites and powerful enough to process data in-situ may still be too vulnerable to radiation for use in space,” said Yamaguchi.

SMARTIE would solve these problems by distributing readily available computer components across a compact, flexible architecture, which would then fold into a single package only 16 mm long, 22 mm wide, and 6 mm high. These components would include an off-the-shelf multi-core processor, a graphics processing unit (GPU), and non-volatile Magnetoresistive Random Access Memory (MRAM) memory units, with a system controller providing adaptive redundancy to ensure gathered data isn’t lost if the system suddenly loses power.

“These are standard pieces of computer hardware, but when we bring them together within this folded structure, we create a system that consumes less energy, takes up less space, helps insulate SMARTIE from radiation, and even makes it less likely that radiation will even collide with SMARTIE in the first place,” said Yamaguchi.

A wide variety of scientific missions dedicated to gathering data with space-based remote sensors would benefit from a computer like SMARTIE. In particular, researchers developing SMart Ice Cloud Sensing (SMICES) an instrument that would help improve climate and weather models – are interested in using the technology to support their goal of measuring ice crystals in high-altitude clouds.

“The ice crystals we want to measure are best characterized using radar within the 239 GHz range, but that requires a pretty energy intensive radar apparatus. We want to run advanced AI algorithms that would only turn on the radar when necessary. For a program that complicated, we’ll need to use something as powerful and compact as SMARTIE,” said William Deal, Principal Investigator (PI) for SMICES.

“Advancing technologies that will help us learn more about Earth systems means empowering researchers to develop a full suite of tools, from information systems to components to fully-functioning instruments. Our programs collaborate to make sure our PIs have access to the latest science related to their projects,” said Amber Emory, ESTO’s ACT Program Manager.

Yamaguchi is excited to see other scientists explore the possibility of incorporating SMARTIE into their instruments. Enabling researchers to accomplish their scientific objectives is, after all, what motivates his team to develop this novel component.

“We have to support one another. Every incremental step forward lays the foundation for future groundbreaking discoveries, and we hope SMARTIE will eventually become a cornerstone of that foundation,” said Yamaguchi.