05/17/21 – According to NOAA, disasters in 2020 cost the U.S. more than $95 billion in damages – more than any other year on record. Minimizing the human and financial cost of these disasters means dispatching much-needed aid to devastated communities as efficiently as possible.

“We can’t stop natural hazards, but we can limit their impact on human populations by executing a quick, effective response,” said Cathleen Jones, a researcher at NASA’s Jet Propulsion Laboratory (JPL). 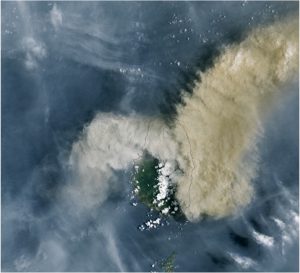 An image from Landsat 8 of the La Soufrière eruption on April 9, 2021. Smart Tasking would reduce the amount of time it takes data products from space-based remote sensors to get into the hands of first responders. Image credit: Lauren Dauphin / NASA Earth Observatory

Jones and her team are using funding from NASA’s Earth Science Technology Office (ESTO) to develop a new software system that aims to provide decision makers with essential information enabling first responders to reach victims of disasters more quickly. Their system, called “Smart Tasking,” is designed to automatically alert Earth-monitoring satellites when a disaster occurs, tasking them with prioritized downlink and processing of any data that may be of use to first responders. While NASA and other space agencies already provide rescuers with data products describing disasters, they do so only after a person manually tasks satellites with assembling the necessary information. By automating this process and instructing satellites to begin assembling data products almost as soon a disaster occurs, Smart Tasking could dramatically reduce the amount of time it takes to get invaluable information about the exact location, duration, and magnitude of disasters into the hands of first responders.

“We want to cut out the middleman. Enabling satellites to respond automatically to disasters instead of making them wait for manual instruction streamlines their ability to respond to urgent data requests,” said Jones.

Satellite data is critical for coordinating disaster relief efforts. This data provides first responders more information about the extent and impact of a disaster itself, and in some cases detailed images of the affected area. This allows rescuers to identify safe places to shelter refugees and rescuers, find passable supply and egress routes, and identify ruined infrastructure where wounded people could be trapped in rubble.

“There’s no substitute for the knowledge we can provide using space-based remote sensors. These instruments have a bird’s eye view of disaster zones, and that view allows first responders to get a more complete picture of a disaster situation,” said Jones.

The challenge, she says, is plucking information relevant to a specific disaster from the torrents of data satellites sent back to researchers each day. Currently, it’s up to human analysts to communicate with satellites about whether a disaster has occurred and decide which data might be most relevant to rescuers on the ground.

“That process could take hours or even days, and in the aftermath of a disaster, every minute counts. Even minor delays might mean the difference between life and death for those in distress,” said Jones.

Smart Tasking shrinks that delay from hours or days to minutes, providing an automated interface between satellites and databases like USGS’s Volcano Notification System (VNS) platform – which maintains information on volcanic eruptions – to identify and downlink data that would be useful for coordinating disaster relief. Its flexible, cloud-based architecture would accommodate multiple inputs from monitoring networks and multiple clients to service increased data requests during large disaster events, while its event databases catalogue each data request to prevent duplicate or overlapping requests from delaying data products.

“It’s about speed. The faster we can image disaster areas and create these data products, the faster they can be used to improve disaster response efforts. Smart Tasking can increase the utility of NASA data for urgent response, and there’s the potential to leverage this program to support studies of other dynamic Earth systems as well,” said Jones.

While Smart Tasking could be used to prioritize disaster-related data gathered by numerous instruments already in orbit, Jones and her team hope that it will be especially useful for the upcoming NASA-ISRO SAR (NISAR) mission. Scheduled to launch during the summer of 2022, this joint mission between NASA and the Indian Space Research Organization (ISRO) will systematically image the Earth’s surface over the course of three years to measure surface displacement as small as millimeters in size.

“Data that detailed would be incredibly useful for disaster relief purposes, but it will have to be identified and filtered from a great deal of other data first. Smart Tasking would be an excellent resource for doing this,” said Jones.

ESTO helps researchers like Jones develop cutting-edge technologies that are crucial for studying complicated Earth systems. Specifically, ESTO’s Advanced Information Systems Technology (AIST) program provided Jones with the funding she needed to develop a functioning Smart Tasking prototype, which demonstrates the viability of this project and paves the way for integrating Smart Tasking into current and future NASA missions.

“We identified a need for something like Smart Tasking to streamline urgent data requests, and ESTO helped us fill that need. To tap the full potential of spaceborne sensors, we need to continue developing new information systems that will let us process NASA’s remote sensing data efficiently,” said Jones.