HyTI is a 6U CubeSat demonstration mission that will enable the next generation of high spatial, spectral, and temporal resolution thermal infrared (TIR) imagery acquisition from low Earth orbit. A future constellation of 25-30 HyTI satellites could monitor Earth’s volcanoes for signs of impending eruptions and map soil moisture for crop management at lower cost than a single, conventional satellite. HyTI is scheduled for launch in 2022.

Magmatic gases emitted by volcanoes herald the movement of magma beneath Earth’s surface and serve as early warning of impending eruptions. Quantifying low-intensity gas emission that characterize these pre-eruptive states requires high spatial and spectral resolution long wave infrared (LWIR) measurements to allow both the detection and quantification of gas fluxes, and how these fluxes vary in time. Hyperspectral imaging with high spatial resolution in the LWIR has not yet been achieved from space. Increased resolution TIR data would also greatly advance our ability to study other Earth system processes and applications with societal relevance, including aiding crop water use assessments.

In a 430 km orbit, the HyTI instrument will have ground sampling resolution of 60 m for 25 spectral samples in the 8.0-10.7 μm wavelength range, with narrow-band NEdT (noise equivalent variation in temperature) of less than 150 mK. Such advanced TIR spectral resolution would be better able to quantify the path concentration of volcanic SO2 in the atmosphere and estimate the outgoing longwave radiation and fluxes of sensible heat, latent heat, and conduction into or out from the soil. 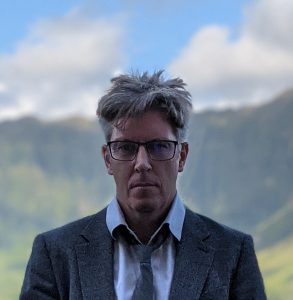 Robert Wright is the director of the Hawaii Institute of Geophysics and Planetology (HIGP) at the University of Hawaiʻi at Mānoa, and the principal investigator for the HyTI mission. He received his Ph.D. from the Open University in the United Kingdom and his M.Sc. from the Imperial College of Science, Technology and Medicine.

The HyTI project is a product of partnerships with HIGP, the Hawaii Space Flight Laboratory, JPL, and Saraniasat, Inc.