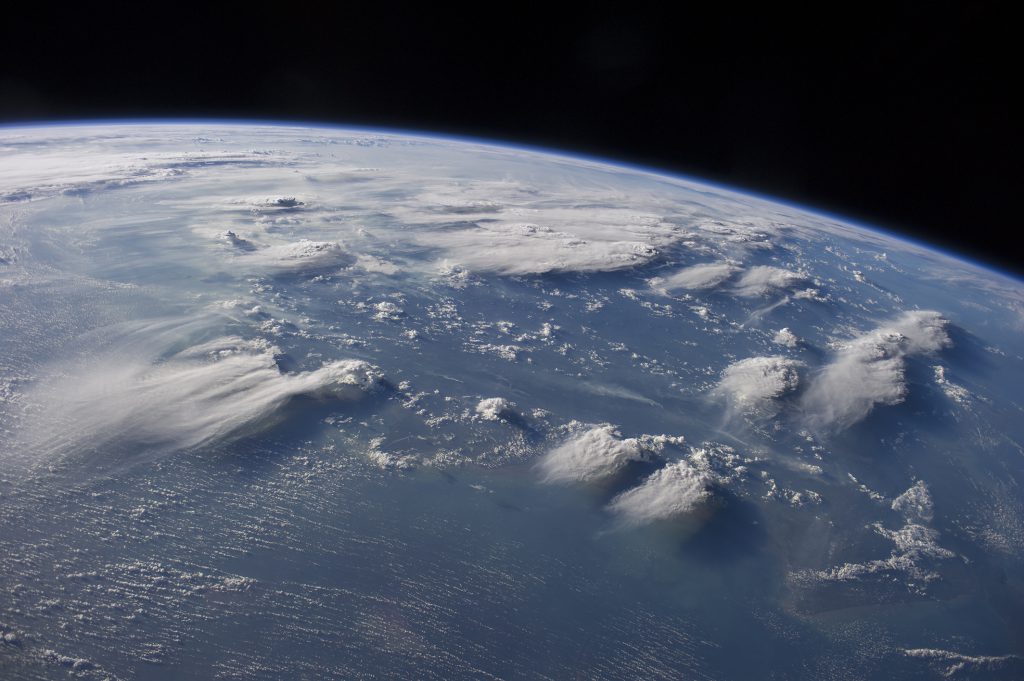 A collection of thunderstorms moves across Indonesia. With SMICES, researchers will be able to improve climate and weather models by measuring the small ice particles formed at the top of storm clouds. Image credit: NASA Earth Observatory / International Space Station (ISS)

Wispy white cirrus clouds stretched across a blue sky may seem insubstantial, but they actually have a huge impact on Earth’s climate. Learning more about these clouds would allow scientists to develop better models for understanding storms and climate change.

“Cirrus clouds cover more than 50% of our planet. If we can build a better body of fundamental data describing the structure of these clouds, we’ll have a far superior understanding of how that coverage will affect our weather and climate moving forward,” said William Deal, a staff engineer at Northrop Grumman Systems Corporation.

With a grant from NASA’s Earth Science Technology Office (ESTO), Deal is working with a team of researchers at Northrop Grumman and NASA’s Jet Propulsion Laboratory (JPL) to develop a new instrument that would reduce the cost and complexity of using space-based remote sensors to study the tiny ice crystals making up cirrus clouds. Their project, Smart Ice Cloud Sensing (SMICES), combines three passive multi-band radiometers with an active millimeter-wave radar system to measure the size and shape of these ice crystals as they float through the troposphere. In addition to gathering multi-angle data on these ice crystals, SMICES would also gather data to improve the understanding of the formation of tornadoes and hurricanes in near real-time, exploring how high-altitude ice clouds might impact the location, severity, and frequency of these storms. This information would make it easier for researchers to refine their models for forecasting severe weather events and predicting the long-term effects of climate change. An intelligent instrument, SMICES would employ artificial intelligence algorithms to make independent decisions regarding power consumption, which would make it the first NASA sensor fit for using energy-intensive active radar systems within shoebox-sized CubeSat platforms to collect dynamic measurements of ice clouds.

“This is an incredibly compact, semi-autonomous, low-power solution for studying high altitude ice clouds and their relationship with climate and weather trends. The data SMICES sends back to Earth will have a significant impact on global climate models,” said Deal.

Cirrus clouds both alleviate and exacerbate the effects of climate change. While thick cirrus clouds packed with large ice crystals help regulate Earth’s global temperature by reflecting incoming solar radiation back into space, those same thick clouds also absorb and trap lots of solar energy, while thin cirrus clouds made up of smaller ice crystals neither reflect solar radiation nor allow thermal radiation emitted by the Earth itself to escape our atmosphere.

Deal adds that activities like deforestation and the burning of fossil fuels may increase the prevalence of cirrus clouds by spewing large amounts of fine particulates into the upper atmosphere, which then become the nuclei of high-altitude ice cloud crystals as they encounter freezing water vapor. If that’s the case, then incorporating data on ice clouds could be critical for creating models that can accurately describe the relationship between those ice clouds and the prevalence of severe weather events as our climate continues to change.

“Dynamic data on ice crystals in cirrus clouds would clear up a lot of uncertainties in our climate predictions and fill a void in the satellite data record that has crippled our ability to accurately quantify weather events with spaceborne sensors for decades,” said Bosch.

SMICES would employ several cutting-edge technologies into a single instrument to gather this critical data. In particular, its ability to selectively distribute energy to an active radar system using a pair of machine learning algorithms allows it to decrease overall power consumption by a factor of seven without compromising the strength of its radar. This means SMICES is the first compact spaceborne remote sensor fit for measuring ice crystals using radar frequencies in the 239 GHz range – which is essential for getting a clear look at cirrus clouds contributing to severe weather events.

“The artificial intelligence algorithm combs data from the three multi-band radiometers for evidence of an interesting tropospheric feature. If it finds such a feature, like a severe storm, the artificial intelligence controller activates its onboard radar and focuses it on the targeted event. The radar only activates when necessary, and that’s critical for incorporating the 239 GHz active radar onto a small, cost-efficient satellite,” said Deal.

ESTO leverages NASA resources and expertise to help innovators develop promising technology concepts – like SMICES – into space-ready tools for gathering crucial data on complex Earth systems. Specifically, ESTO’s Instrument Incubation Program (IIP) gave Deal and his team the support they needed to prepare SMICES for future Earth science missions. While their system likely won’t be sent into space in the near future, an airborne test of SMICES is scheduled for winter, 2022.

“Lingering questions about how our climate and weather will change over time can only be answered with advanced tools tailored to explore aspects of our world that are still obscure. With SMICES, we hope to shed light on one of those aspects and its impact on other Earth systems,” said Deal.