A Tiny New Instrument Aims to Monitor Flora from Space

Just like Dr. Seuss’s Lorax, a tiny new instrument aims to “speak for the trees, for the trees have no tongues.”

This instrument combines and miniaturizes two sensors to monitor the health of trees, among other vegetation — information needed by forest and water managers.  NASA’s Earth Science Technology Office and Goddard’s Internal Research and Development (IRAD) program are funding the development of MiniSpec, short for miniaturized spectrometer.

The eventual goal is to put a MiniSpec onto multiple small satellites so that scientists can observe plants at different times of the day, while keeping overall costs lower than they would be for a large satellite mission.

In the near future, MiniSpec will be incorporated into an IRAD- and ESTO-funded project led by Goddard engineer Guangning Yang and Goddard scientist David Harding. The Concurrent Artificially-intelligent Spectrometry and Adaptive Lidar System (CASALS) will find new ways to combine measuring capabilities into one instrument to better understand both ice and vegetation.

Most operating satellites measure plants once a day, and often in the morning when there’s less stress on the plants, Ranson said. MiniSpec aims to measure plants both in the morning and in the early afternoon, when they’re often facing harsher sunlight, warmer temperatures, and less moisture.

To do this, MiniSpec has two parts: one that measures light and the other that measures shadows. As its spectrometer determines how plants reflect sunlight, its camera takes a look at how plants create shadows.

“Plants reflect sunlight in different wavelengths depending on how well they’re functioning,” Ranson said. For instance, they absorb certain wavelengths, or colors, which they need for photosynthesis, while reflecting colors they don’t need, like the color green. “This is why we see plants as green,” Ranson said.

Once in orbit, MiniSpec could see how and when leaves’ colors change over time to note anything unusual. “Many indications of health or stress can be seen with this kind of instrument,” said Randolph Wynne, a Virginia Tech professor who advised Ranson. “For example, when a plant is stressed by receiving too much light, it responds by slightly changing pigment concentrations. We can look at different colors to pinpoint issues with chlorophyll, water, soils, or something else,” he added. 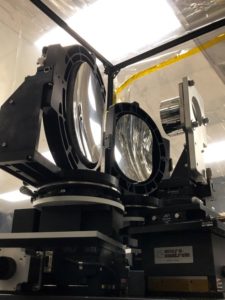 To make MiniSpec small enough to fit on a small satellite, the team miniaturized a spectrometer using freeform optics, which is the same technology that transition lenses use to darken when exposed to sunlight.

In a free-form optical system, the surface shape of the mirrors can take any form and even fit with smaller configurations. Instead of the usual arrangement of lenses and mirrors, “we designed a specialized surface of the mirrors to reflect the incoming light, or light passing through the spectrometer,” Ranson said, adding that the team capitalized on previous IRAD-funded studies that showed free-form optics were necessary to reduce the instrument’s size. In fact, using free-form optics reduces the volume by 50 times, Ranson said.

While MiniSpec monitors light, it simultaneously uses a small camera to measure the three-dimensional structure of plants, like how they are physically arranged in space. Knowing how tall a plant is and how it’s holding its leaves can help determine how much light is available to the plant for photosynthesis.  “Understanding plant structure enables us to estimate the amount of shadows present in the scene and improve measurement accuracy,” Ranson said.

“This combination hasn’t been done before from space,” Wynne said. “We can look at underperforming areas and note any opportunities for early intervention and management.”

MiniSpec could help forest specialists, among other decision makers, better contain diseases, like the Oak Wilt fungus. Oak Wilt is one of many diseases currently hitting trees at a higher rate than previously recorded, said Jeannine Cavender-Bares, a professor at the University of Minnesota who also advised Ranson. Oaks are the most abundant trees in the U.S. and Mexico and contribute at least $22 billion every year to the U.S. economy, Cavender-Bares said. Not only do they produce wood products, they also store greenhouse gasses and filter air pollutants.

As a disease like Oak Wilt progresses, a spectrometer can pick up on changes in physiology, leaf chemistry, and color due to wilting from the spread of the fungus that blocks water transport in the tree, as well as other stressors. “Having eyes in the skies is really critical for keeping up with the disease,” she said.

In addition to catching diseases as soon as they appear, MiniSpec can also illuminate how forests take up carbon, shedding light on how they possibly mitigate the impact of climate change. “Just because you have trees there doesn’t mean they’re doing what you expect,” Wynne said. “If we can really understand, on a management scale, where these forests are productive and how well they’re photosynthesizing, that’s incredibly powerful at a really important time,” he said.

This story originally appeared in the Winter 2020 edition of Goddard’s CuttingEdge Magazine.