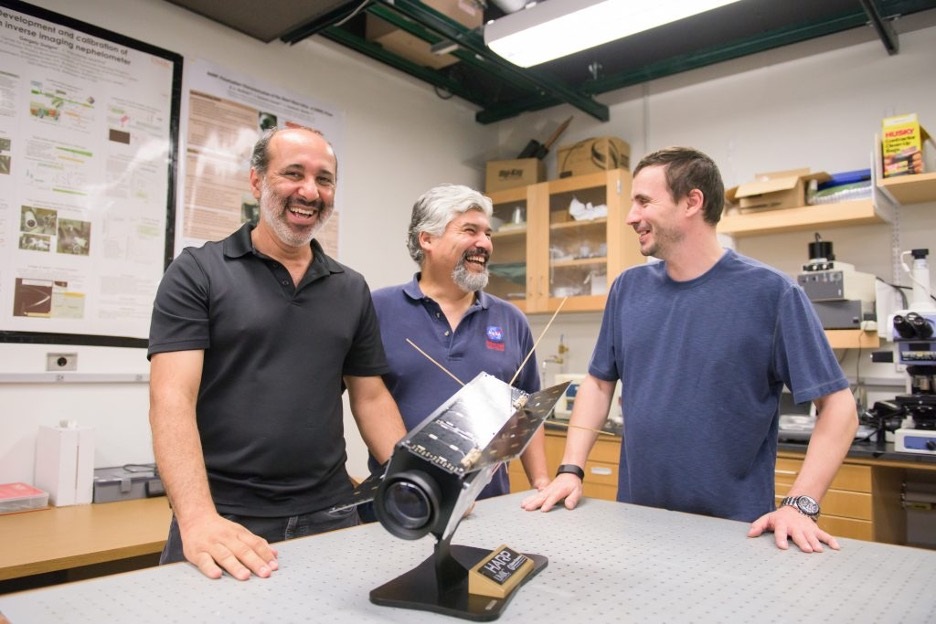 Vanderlei Martins, Roberto Borda, and Dominik Cieslak with a full-size model of HARP at UMBC. (Credit: Marlayna Demond for UMBC)

5/16/22 – NASA’s Hyper-Angular Rainbow Polarimeter (HARP) instrument deorbited after 777 days in space, successfully ending a two-year mission that pioneered new technologies for observing cloud and aerosol properties from space – which is crucial for learning more about Earth systems like air pollution and climate change.

Specifically, HARP demonstrated that an experimental, compact imaging polarimeter – which observes how light scatters off of particles to determine their size, shape, and chemical composition – is fit for gathering atmospheric data from onboard a cost-efficient CubeSat.

Jose Vanderlei Martins, HARP’s principal investigator and Director of the Earth and Space Institute at the University of Maryland, Baltimore County (UMBC), led a team of researchers from NASA and UMBC to develop a polarimeter that uses a unique prism to split three identical images into independent detector arrays, allowing HARP to achieve highly accurate, simultaneous imagery of three polarization states with minimal hardware.

“It was a very successful mission. When I wrote the proposal, the requirement was for the mission to survive for three months. We ended up collecting data for two years…we are really, really excited with the performance, with the results, and with the science,” said Vanderlei. 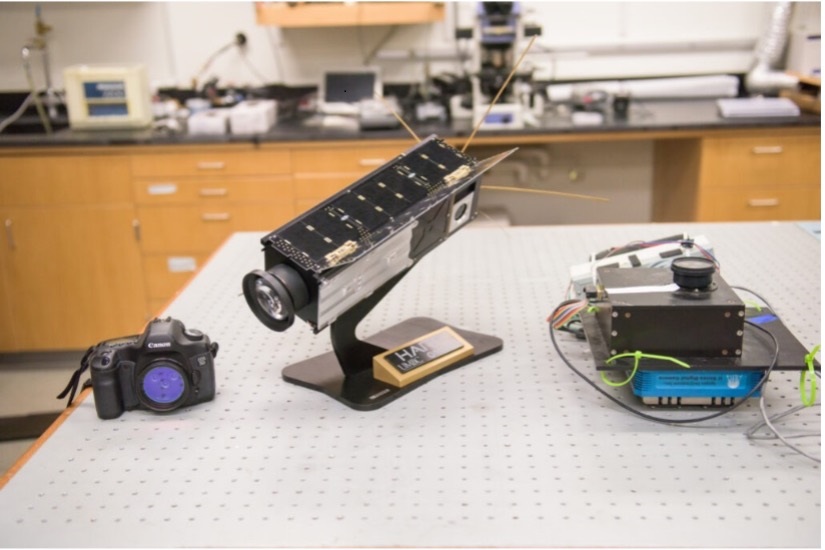 A full-sized model of HARP at the UMBC Earth and Space Institute. HARP was a milestone mission, marking the first time in history that a wide-angle polarimeter orbited Earth onboard a spacecraft. (Credit: Marlayna Demon for UMBC)

In particular, HARP could become a critical component of NASA’s Atmosphere Observing System mission. Aerosol-cloud interactions are currently the largest uncertainty in climate models, and AOS will help scientists reduce that uncertainty and improve our understanding of innumerable Earth systems.

Smaller than a shoebox, lighter than a suitcase, and capable of observing aerosol-cloud interactions from 400 km above Earth’s surface, HARP won the 2020 “Small Satellite Mission of the Year” award from the American Institute of Aeronautics and Astronautics.

The 3-unit CubeSat, developed in collaboration between UMBC and the Space Dynamics Lab in Utah, also has the distinction of being the 100th CubeSat mission supported by NASA’s CubeSat Launch Initiative, traveling to the International Space Station (ISS) from NASA’s Wallops Flight Facility onboard a CYGNUS spacecraft on November 19, 2019.

These images were only the first in a collection of breathtaking views of our planet’s cloud and aerosol systems HARP captured while in orbit. Throughout June 2020, HARP also gathered images showing Saharan dust kicked into the atmosphere by windstorms traveling over the Atlantic Ocean and settling in the Americas.

“That’s one of the examples of global connectivity. Aerosols produced in one place can travel around the globe and affect clouds and precipitation. HARP can tell us more about the microphysical properties of these particles that are being transported,” said Vanderlei.

Originally scheduled to orbit Earth for only a year, HARP continued to relay useful data back to researchers on Earth for a full two years after it launched, up until the very moment it reentered Earth’s atmosphere.

Other NASA missions have already used – or plan to use soon – identical HARP instruments to monitor aerosol-cloud interactions in Earth’s atmosphere from aircraft and space platforms.

These include NASA’s ACEPOL and LMOS airborne missions, which used AirHARP as an airborne sensor to observe aerosol and clouds from an altitude of up to 20km, and NASA’s Plankton, Aerosol, Cloud, ocean Ecosystem (PACE) mission, which will use HARP2 to look at Earth’s atmosphere and ocean ecosystems from space.

“We designed every subsystem. Every single piece of HARP was designed from scratch, was built, was studied from scratch, and came out together in this nice compact payload. The whole thing is very gratifying. We’re really happy with what HARP has achieved so far,” said Vanderlei.

Vanderlei and his team are particularly excited about HARP’s role in NASA’s upcoming PACE mission. They’re currently working closely with scientists from PACE to prepare HARP2 for launch sometime in 2023.