A Coordinated Dance in Outer Space

As Typhoon Trami churned across the Pacific Ocean, bringing fierce winds and torrential rain to Japan and Taiwan in September 2018, two shoebox-sized satellites happened to peer down at it at the same time, their instruments recording how the storm was forming and changing.

Combining data on the typhoon from the CubeSats TEMPEST-D and RainCube created a more complete picture of the storm, revealing how the clouds changed before it rained and how much rain actually fell. Although the coordination was fortuitous in this case, a new NASA-funded technology led by researchers at The Ohio State University (OSU) in Columbus, Ohio could help plan future joint observations.

Researchers at OSU have created a modular, open source software library that is able to simulate how future adaptive sensors, which can perceive and react to their surroundings, on CubeSats and other satellites will communicate with each other to coordinate how best to image Earth.

“Anyone who proposes a mission needs to do a lot of simulations on the mission’s capabilities and what it would produce,” said Joel Johnson, the project’s principal investigator and a professor at OSU. “This project aims to expand existing software tools for planning Earth observing missions so that they can simulate adaptive sensors that collaborate and the resource constraints associated with CubeSat platforms.”

A waltz under the stars

Johnson and his team call the new suite of software STARS, short for Simulation Toolset for Adaptive Remote Sensing. STARS consists of three distinct components that can be used separately or in combination. Each component helps to answer the following questions: 1) Should a sensor take a measurement? 2) Which sensor on which satellite should take it? 3) How should the sensor take a measurement?

MANAGE: To measure or not to measure

STARS directs an instrument to make autonomous decisions on when to take a measurement based on guiding inputs. For instance, a user can program a mission to take measurements only over land or tell a sensor only to image clouds in locations where they are likely to occur. If a sensor can choose when to take measurements, it can also manage its consumption of crucial resources like power, onboard storage and bandwidth to transmit the data back to Earth. This is particularly useful for users designing Earth observing missions that include CubeSats, which can have more significant power and data constraints than larger satellites.

Once a mission has determined to take a measurement, it needs to know which instrument should take it. COLLABORATE guides a mission by providing a set of actions. For example, if it uses a particular rain sensor to take a measurement, it determines the next satellite with a similar rain sensor that will visit the same location and tells that satellite to prioritize obtaining follow-up data to track the rain. This is particularly useful during natural disasters, like hurricanes, when decision makers need more data over a specific area.

ADAPT: How to take a measurement

When instructed to acquire data, each sensor also needs to be able to take it effectively. Adaptive sensors are able to find the best way to take a measurement on their own. Just as animals can react to their environment and change their actions, an adaptive radar can optimize its sensor parameters in order to improve the information obtained. “The adaptive hardware and the simulation that we built to model it is capable of making that decision on its own in real time faster than any operator could respond to the incoming data,” said Jakob DeLong, a graduate student at OSU who worked on the project.

Putting it all together

In addition to being able to use these tools individually or in combination, users are also able to customize their simulations with whatever inputs they want. “We’re aiming for a fill-in-the-blank structure that make it easy for users to adopt the library,” said Graeme Smith, a co-investigator and research assistant professor at OSU.

“Prior to STARS, it was challenging to implement simulations of observing systems having adaptive sensors, resource constraints, and multi-satellite collaboration,” DeLong said. “With STARS, you can begin to investigate the benefits of these sensing methods so that future missions can be planned,” he said.

“We want to advance the adoption of these technologies to improve the Earth observing system,” Johnson said.

You can download STARS on GitHub here. The project was funded by the Earth Science Technology Office. 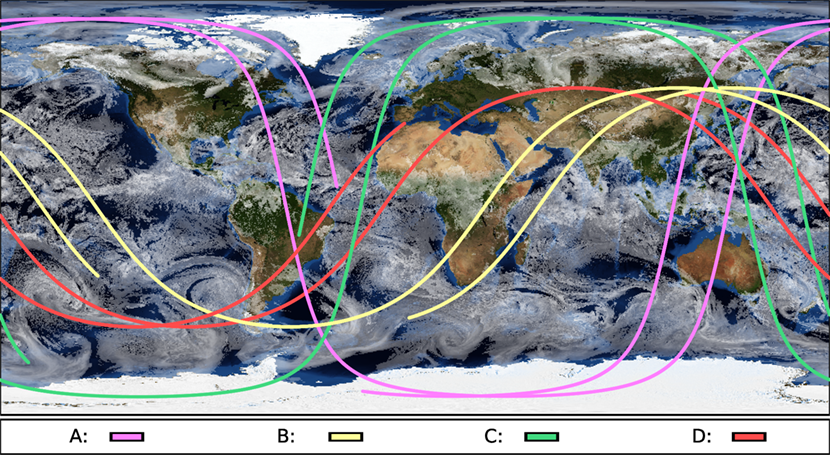 The image shows a STARS simulation of the orbits of four satellites (A, B, C and D) involved in a coordinated observation. The satellites are in distinct orbit planes so they rely on dynamic planning of multi-hop communication links to ensure they can queue other instruments to take high-priority measurements.