Recent advancements in small, standardized satellites and increasing, low-cost, access to space are rapidly transforming the way technologies are demonstrated and validated. Meaningful risk reduction for hardware components and information systems can be accomplished quickly for future flight instruments.

CubeSats
CubeSats – 10cm cube platforms used as secondary payload to a larger satellite – are leading the way as a standardized platform. They can be inexpensive, as little as $1-2M including launch and basic operations when leveraging prior payload development. They can also built and launched quickly, generally within18-24 months from concept formulation to deployment. CubeSats can be combined to form 2- or 3-unit configurations for a variety of applications. Although precise numbers are unavailable, there have been approximately 100 CubeSats launched as of 2012.

Access to Space
Flight opportunities for secondary payload technology demonstrations are also on the increase. There are a number of commercial launch providers entering this field to provide/broker access to space. Several government efforts have also emerged to provide opportunities for small satellite payloads, including:

Projects
To date, ESTO has funded and facilitated the development and launch (in 2011) of one CubeSat project: the CubeSat Onboard processing Validation Experiment (see right sidebar). Two more are in progress:

ESTO released a Request for Information (RFI): Future Space Validation of Earth Science Technologies in 2011 and plans to solicit proposals for space validation in the 2012/2013 time frame. ESTO uses the NASA Research Announcement (NRA) as its primary investment vehicle.

For a full list of ESTO investments, across all program lines, visit the Solicitations page. 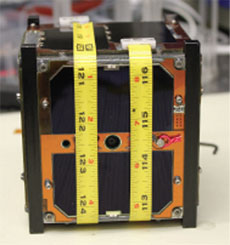 Future missions will generate very high data volumes. For example, the Multi-
angle Spectropolarimetric Imager (MSPI - Instrument Incubator Program, Diner/JPL), a candidate for the ACE mission concept, will produce 95 Megabytes per second per camera and there are nine cameras. There is currently no way to get that amount of raw data from space to the ground.

One solution is to move the first stage of ground processing on-board the satellite in a new radiation-hard-by-design FPGA. This would reduce downlink requirements by two orders of magnitude.

In 2011, the MSPI algorithm and new FPGA were launched on a CubeSat (above), built by the University of Michigan’s Student Space Systems Fabrication Laboratory (S3FL) as an accessory payload to the NASA Suomi NPP mission. Access to space was enabled via NASA SOMD’s CubeSat Launch Initiative.